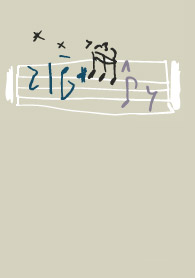 Shakuhachi is a five-hole bamboo flute, introduced to Japan from China around the 8th Century AD. It is an end-blown flute and has a curious history involving religion, politics, espionage and culture, but especially renowned for its connection to Zen Buddhism.

Adam has learnt shakuhachi since 2002, predominantly with Andrew MacGregor, but also Kaoru Kakizakai in Chichibu. Adam has studied the honkyo-ku repertoire with these teachers as passed on from Katsuya Yokoyama and Tajima Tadashi via the Kinko tradition.

For Adam, the shakuhachi has had a profound impact on his understanding and approach to his other instruments, due in part to the breath control and technique required, but also the way that traditional Japanese music connects with more contemporary music practice in its use of time and space, as well as timbral nuance and extended techniques.

Adam teaches shakuhachi at Melbourne University as well as privately, and is able to provide flutes and manual for purchase. For beginners the plastic Yuu flute is an economic but reliable option, or good quality bamboo flutes by Okadera Chikuyu may be arranged for selection.